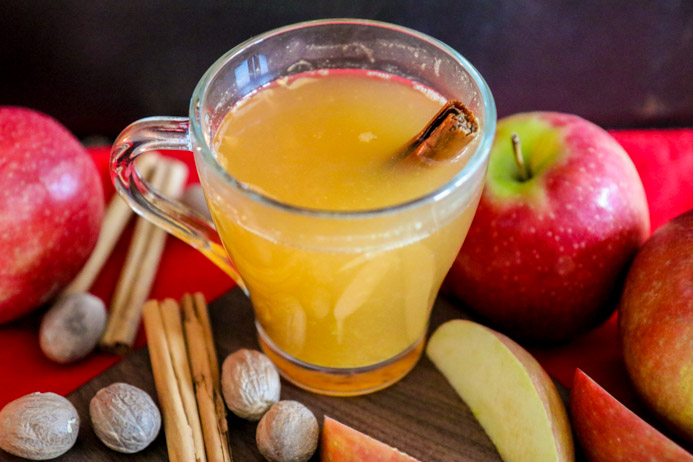 This Longueville House Beverages Hot Cider recipe is part of a series of posts from my Munster Vales travel guide.

If you read my last blog post, you’ll know that Longueville House has just won ‘Best Breakfast in an Irish Country House’. Well, guess what? They also just won the ‘Overall Champion’ and took home the gold medal at the Alltech Dublin Cider Cup 2018. Hurrah. And very well deserved. 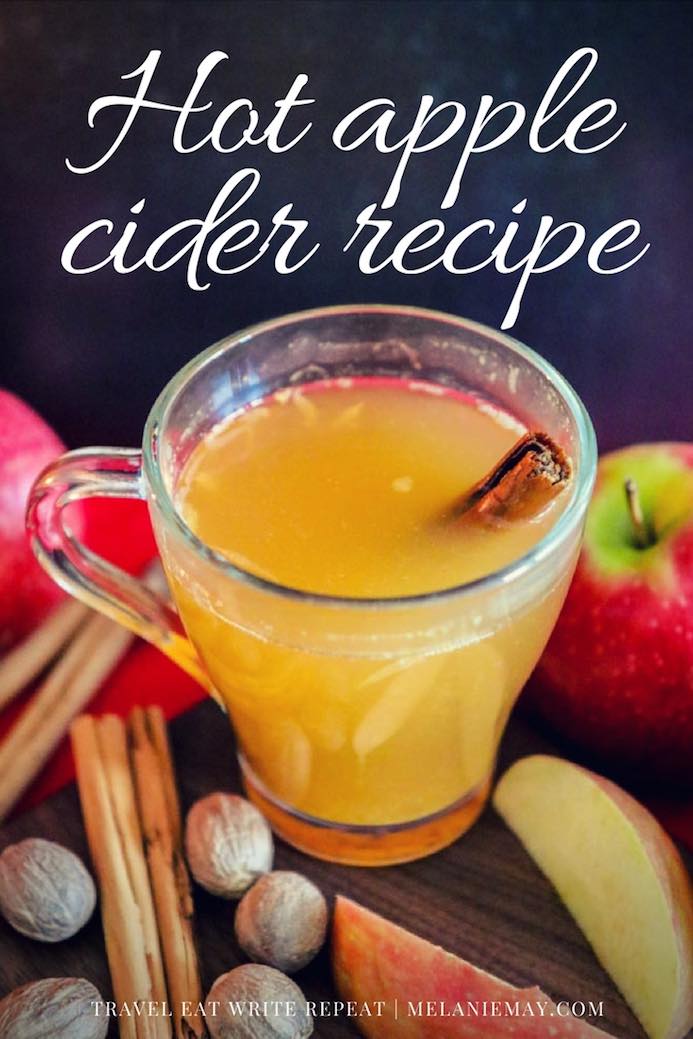 The history of beverage making and distilling at Longueville House goes back over 40 years when Michael O’Callaghan began making wine from the vines that he planted on the grounds of Longueville House. However, in 1985 he turned his hand to making brandy. He wanted to make a drink similar to French Calvados so he planted a cider apple orchard.

Nowadays his son William leads the beverage business. He has expanded the orchards to 25 acres. He grows only heirloom cider apples (Michelin and Dabinett). Longueville is one of just four single-origin orchards in Ireland. I was fortunate to be given a tour by the very knowledgable and passionate Rubert Atkinson, the Sales and Marketing Manager of Longueville House Beverages.

Not only does William continue his father’s legacy producing Ireland’s only apple brandy, but he also expanded the product range to included naturally made cider. The cider’s name is Longueville House Cider or O’Callaghan’s Irish Cider in the United States. 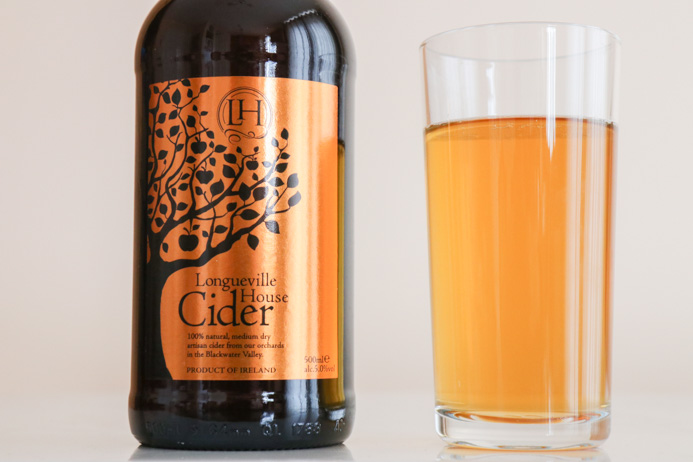 The Dabinett and Michelin apples are harvested in late October. The apples are then crushed and pressed in the cider mill on the Longueville House estate. The pressed juice is naturally fermented, taking place as a result of the action of the wild yeasts, which are particular to the orchards and environs of Longueville. The fermentation process takes between two and six months.

There are no added colourings, additives, sulphites or preservatives used at any stage. The entire process, from growing the apples to the fermentation of the cider, is done on the estate.

I first tried Longueville House Cider at a tasting event and I was surprised at how little it tasted like any cider I had tried before. It isn’t too fizzy or sour and has a lovely fresh apple flavour. It is crisp and refreshing and very well-balanced with lots of depth and rich, complementing flavours. 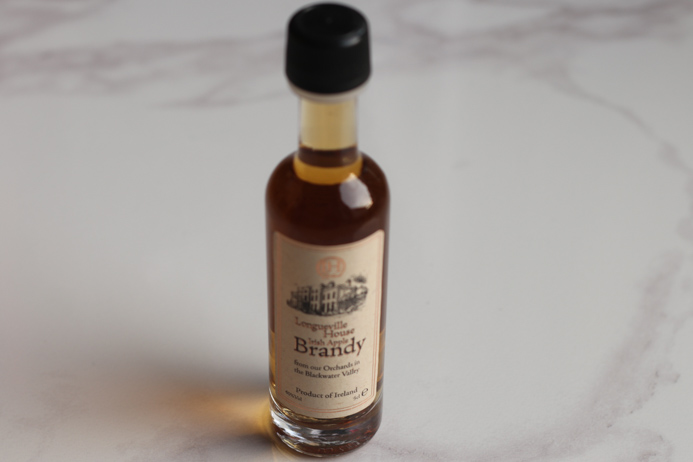 During the maturing process, the brandy draws out the tannins, vanilla, oak and smokiness from the oak wood. It develops a rich, dark colour after four years resting in the oak barrels.

The brandy is smooth with a full-bodied mouth-feel. I think it smells of apple pie and ice-cream. It is wonderful sipped neat, warmed slightly by the heat of your hand on the glass. It would also be lovely for an Irish coffee or ideal for making brandy sauce. 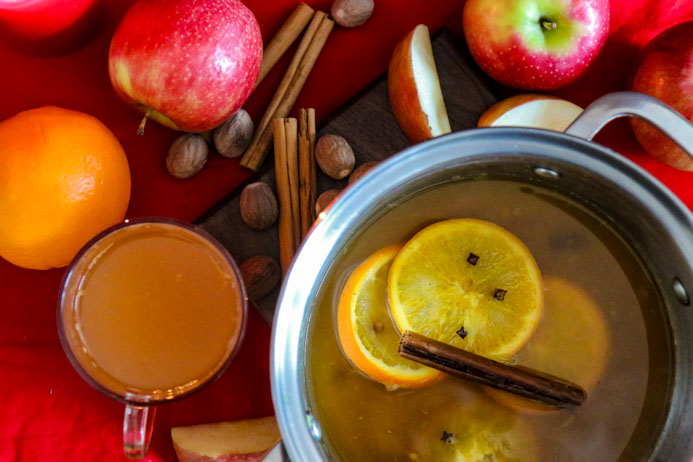 Tip: if you don’t want to use the spices you can buy a mulled spice/wine teabag or sachet and use that instead or you could use some ground allspice.

Also, you can use more or less spices depending on your taste. I added a full stick of cinnamon and three slices of orange with three cloves in each. I don’t like my hot apple cider recipe too sweet so I added just about a teaspoon of Demerara sugar. 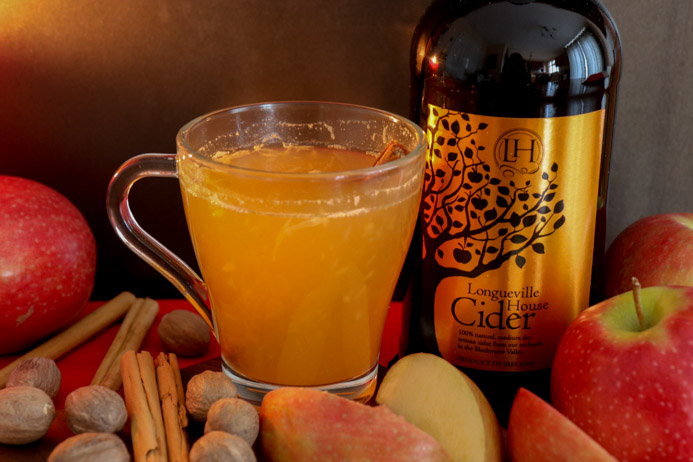 In a heavy-based saucepan, pour in all the Longueville House Cider.

Place the pot on a low heat.

Add the cloves, cinnamon and nutmeg and slices of orange.

When the liquid is beginning to heat, carefully taste and sweeten with brown sugar or elderflower cordial or honey. Err on the side of caution here. You can always add some more later on if it isn’t sweet enough.

Allow the mulled cider to heat up slowly but do not bring to boil.

Remove the pot from the heat and then add the orange juice and Longueville House Brandy. The brandy will make the hot cider a bit more luxurious and give it a bit of a kick but you can leave it out if you want to.

Pour into heatproof glasses and enjoy sipping this comforting, hug in a mug. 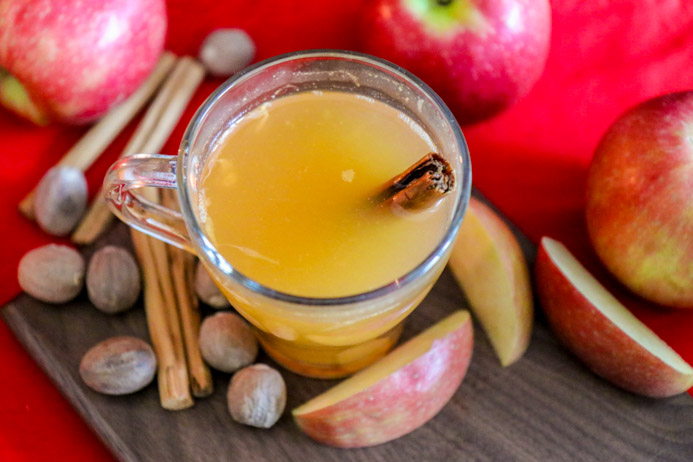 Thanks to Aisling and William O’Callaghan for gifting me a Longueville House Hot Cider Kit.

Read all the details about my trip in my Munster Vales Ireland travel guide.

You can also read my Lough Gur Heritage Centre review

Do you have a hot apple cider recipe? Let me know and I’ll link to it from this blog.

Have you tried the  Longueville House Beverages Hot Apple Cider recipe? What did you think of the taste? Let me know in the comments below. I love hearing from you.

If you liked this Hot Apple Cider recipe you might also like my Mississippi mud cake recipe made with Irish whiskey.

Or you might enjoy baking my salted-caramel chocolate cake recipe. You can make the sauce using brandy.

You might also like my review of the Longueville House Restaurant which goes into detail about the grounds and walled-gardens on the estate.

If you liked this Hot Apple Cider recipe, please share with others.

In "Food and Drink"

Irish Cafes That Give a Reusable Cup Discount2K Total Shares